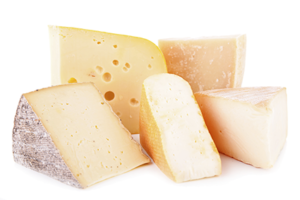 Nearly all dairy products in Australia, such as milk, cheese and yoghurt, are pasteurised. This means they have been heat treated for a short period to kill any bacteria. Pasteurisation has done a great deal to reduce food borne disease over the years.

It is illegal to sell raw cow’s milk in Australia for human consumption that hasn’t been pasteurised (or put through another approved safe treatment) and health authorities recommend that unpasteurised milk should not be consumed.

There are also a few unpasteurised hard or semi-hard cheeses imported into Australia including extra hard type cheeses (parmesan types), the Swiss cheeses Emmental, Gruyere and Sbrinz, and Roquefort cheese but these have to undergo strict production processes and testing. They must  be labelled that they have not been pasteurised.

Vulnerable people such as pregnant women, people with reduced immune systems, the elderly or young children should not consume raw milk or raw milk cheeses as they can get seriously ill if they get food poisoning.

If you milk your own cow or goat, always ensure that it is healthy and here is a simple method to pasteurise  milk at home: