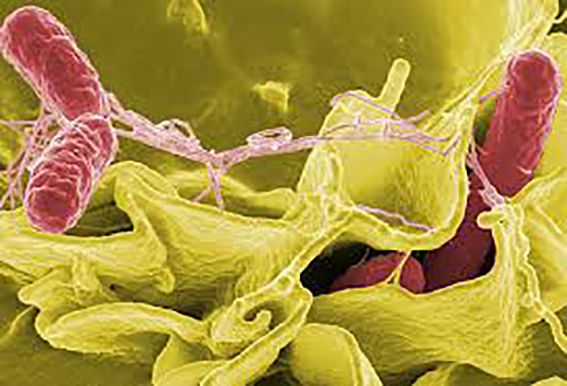 Salmonella food poisoning is referred to as salmonellosis. The symptoms include diarrhea, fever, abdominal cramps and vomiting which in most cases lasts about two to five days. However, in some people it can lead to chronic conditions such as Reiter’s Syndrome or reactive arthritis. It usually takes 8 to 72 hours for symptoms of salmonellosis to occur, so it is not necessarily the last meal you ate that caused it. Salmonella is present in the faeces of ill people and can remain present for some time after symptoms have gone.

In Australia, salmonellosis tends to be more prevalent in the warmer months. Eating food that has been kept in the temperature danger zone for too long allowing the bacteria to grow is often the cause of the illness. However, even small numbers of Salmonella can cause foodborne disease. Sensitive individuals such as the elderly, young children and people with low immune systems, are much more likely to become ill after consuming only a small number of cells.

Salmonella is found in healthy animals and birds farmed for food, wildlife and pests, their manures and environment. As a result, salmonellosis has commonly been linked with consuming animal products such as inadequately cooked meats or poultry, other foods contaminated by raw meats and poultry, as well as foods containing raw or undercooked eggs, and unpasteurised dairy products such as raw milk or cheeses. It is important to note that it is now recognised that contaminated raw fruits and vegetables (e.g. sprouts, paw paw, melons, leafy salad vegetables), spices, and nuts have been identified in outbreaks. Dishes including the foods mentioned as ingredients and that are not cooked or heated before consumption have been linked with outbreaks e.g. raw egg mayonnaise and other sauces, eggnogs, desserts (tiramisu, mousse, fried ice cream etc.).

Salmonella can be transferred to other foods by cross contamination with raw foods, utensils, equipment and soiled hands. Food and water can also be contaminated during food handling or harvesting if handlers are infected and do not wash hands adequately after using the toilet or after caring for an infected person.

Salmonella contaminating food and surviving cooking can grow to a sizeable population of bacteria if the storage temperature is not controlled. The presence of only a few bacteria have caused illness in high fat foods like peanut butter, potato crisps and chocolate where they can survive, and liquids which pass through the stomach quickly, such as unpasteurised juices. It can also survive in relatively dry and mildly acidic foods for some time during food storage.

Because Salmonella is a natural resident in the gut of food production animals we should assume that it is in raw animal foods such as meat, poultry, milk and eggs. Fruits and vegetable foods can also be contaminated, for example if they come in contact with animal or bird faeces or contaminated water during production. See individual food products and safe food handling practices (cook, chill, clean, separate) for further information.