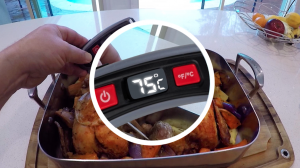 The Food Safety Information Council today launched its summer education campaign with TV and radio spots and a YouTube video to encourage people to use a thermometer to check their food is cooked safely.

‘We know there are an estimated 4.1 million cases of food poisoning in Australia each year. Cooking food to a safe temperature is a great step to reducing those cases,’ Ms Williams said.

‘As celebrity chef Fast Ed Halmagyi says in his radio spot, none of us can tell if food is cooked to a safe temperature just by looking at it. We should always use a thermometer to check whether it’s done.

‘In her radio spot, Henrietta the Hen gives advice on how to handle her eggs safely and our TV Community Service Announcement and YouTube video lets you know how simple it is to use a thermometer and what the safe temperatures are for cooking riskier foods.

‘We encourage everyone to drop into their local homeware or hardware store and pick up a thermometer when they are next at the shops. They don’t have to be fancy ones as a simple dial or digital thermometer can cost less than $20.

‘You should place the food thermometer in the thickest part of the food. As close to the centre as possible and it should not touch bone, fat, or gristle. Start checking the temperature toward the end of cooking, but before you expect it to be done. Be sure to clean the stem of your food thermometer before and after each use. Use a thermometer for great food, cooked safely every time.

‘The Council recommends these temperatures for cooking these high-risk foods safely:

‘Food like whole pieces of red meat or pork or fish fillets will only have contamination on the outside so make sure the surface is well browned and cook the centre to your taste.

‘The Food Safety Information Council is currently celebrating its 20th Anniversary and we would like to thank Queensland Health, the Australian Chicken Meat Federation, Cater Care, the Department of Health and Human Services Tasmania, Elanco Australasia and Media Heads for their support in making Australian Food Safety Week 2017 possible. We are currently running a 20th Anniversary Fundraiser to make sure we can keep going in future years,’ Ms Williams concluded.

There is more information about Australian Food Safety Week 2017 here including the TV Community Service announcement, the YouTube video and radio spots by celebrity chefs Fast Ed Halmagyi and Mark Olive and Henrietta the Hen.

Australian Food Safety Week is the major activity of the Food Safety Information Council which is a health promotion charity that aims to reduce the estimated 4.1 million cases of food borne illness in Australia each year.