Food poisoning is caused by bacteria, or in some cases viruses, contaminating the food we eat. While we tend to blame the last thing we ate it may have been something we ate several days ago. 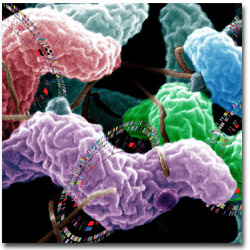 Food isn’t sterile; it comes from animals or grows in soil. If we are healthy adults, our immune systems can deal with small numbers of bacteria and viruses but at higher levels they can make us quite sick. Vulnerable people such as pregnant women, the elderly or people with poor immune systems can get very ill or even die from food poisoning.

Food poisoning is more frequently caused by bacteria. Bacteria like to grow in the ‘temperature danger zone’ between 5°C and 60°C. Their numbers can double and redouble and in a few hours they can reach dangerous levels.

Some viruses that cause foodborne disease include Hepatitis A, Norwalk virus, Norovirus, Rotavirus and some of the Caliciviruses. Viruses don’t grow in food, and one particle may be enough to make you sick.

Common symptoms of foodborne diseases can be mild or severe and can include:

Generally the illness only lasts one or two days. Exceptions are Hepatitis A, some Escherichia coli infections or typhoid which can be severe illnesses lasting for many weeks. Some foodborne illnesses can result in long term health issues involving the immune system, the gut or kidneys as described below.

Here is advice on What to do if you get food poisoning.

For more detailed information about the causes of foodborne illness see: