Many strains of E. coli are harmless and are found naturally in the gut of humans and animals. 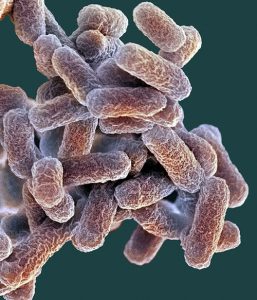 Many strains of E. coli are found naturally in the gut of humans and animals where they may be harmless unless they find their way into other body sites or wounds. Traditionally tests for the presence of E. coli in foods and water have been used to indicate if there is any faecal contamination present. However, particular strains are known to make people sick and some are a common cause of traveller’s diarrhoea and diarrhoea in infants in developing countries. See Travelling overseas food safety. One important type of E. coli produces enterotoxins called Shiga toxins and causes diarrhoea that is often bloody. Patients can develop blood clotting conditions and kidney failure that may result in death. Although these severe infections are not common, in the last few years there have been several food poisoning outbreaks caused by these and other types E. coli both in Australia and overseas. Young children, older adults and immune-comprised people have an increased risk of more severe infections and death.

A wide variety of foods have been implicated in outbreaks caused by Shiga toxin producing E. coli around the world, including unpasteurised apple and orange juices, sprouted seeds, fruits and vegetables, raw milk and raw milk cheeses, raw flour and cookie dough, and meat and meat products, especially undercooked minced meat patties in hamburgers. Untreated and unprotected water supplies can also be a source of the bacterium.

E.coli is easily killed by heating so thoroughly cooking food is a basic method of control such as in hamburger meats. Avoiding consuming raw milk and certain dairy products, washing fruits and vegetables to be eaten raw in clean water, and ensuring drinking and irrigation water are safe will help to reduce the risk of infection, particularly for high risk consumers.