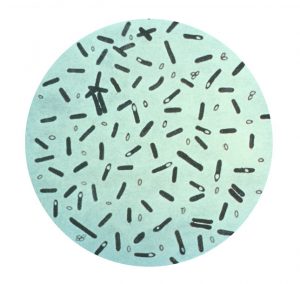 Clostridium botulinum is one of the better-known food poisoning bacteria due to the severe nature of the illness it causes including death, if not treated. Fortunately, botulism occurs rarely in Australia. The illness is caused by a potent neurotoxin produced by the vegetative cells as they grow. This causes symptoms about 12- 36 hours after ingestion, although this can vary. Early symptoms include nausea, diarrhoea and vomiting, but neurological symptoms follow. Infant botulism is commonly reported in some countries in children under one year old. The source of the infection can be unknown although spores in honey that produce toxins in a baby’s tummy have been implicated.

Clostridium botulinum is a spore-forming bacterium and is widespread in environments such as sediments, soil and dust, and dead animal carcasses, worldwide. Different types of Clostridium botulinum produce several types of toxin, and we hear of some types that cause outbreaks in cattle and wildlife in Australia periodically. However, the types that cause food poisoning have not been found so commonly in Australia, and human cases are rare.

When spores of Clostridium botulinum in dust or soil are mixed with moist and nutritious food they can produce cells that produce the neurotoxin as they grow. This bacterium will only grow when oxygen levels are low and if the foods are not refrigerated or do not contain preservatives. Such conditions are typically present in canned, bottled, or vacuum packed foods and in some fermented and traditional foods. A wide variety of under-processed commercial and home processed foods, such as bottle fermented vegetables and fish, have been reported to cause of illness internationally. The toxin is destroyed by heating although many processed foods are not heated before eating (e.g. bottled or canned fish, vegetables, meat spreads). More recently in the USA, vegetables and garlic in oil, and potatoes baked in foil, have been reported in outbreaks where the conditions and poor storage allowed the cells to grow and produce toxin.

Canned, bottled and vacuum packed food should only be purchased from a reliable source. If food is processed this way at home, strictly follow reliable recipes and follow manufacturer’s instructions for processing equipment. If you wish to preserve foods at home useful information can be found at the CSIRO Food Safety website. Babies under 1 year should not be given honey.